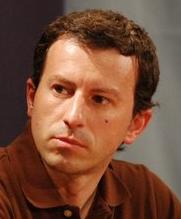 Helder Bastos, professor at the University of Porto, will do tomorrow, October 21st, 2008, his Viva Voce. This is the second doctoral thesis produced by a Portuguese scholar on Cyberjournalism, and the first one to de defenden in Portugal, since the first on written by a Portuguese scholar, João Canavilhas, was done in the University of Salamanca, Spain, and written in Spanish.

Nelson Traquina is the director of this new doctoral thesis, as he was the orientator fo Helder Bastos’ master thesis in 1999, “Jornalismo Electrónico: Internet e Reconfiguração de Práticas nas Redacções” [“Online Journalism: Internet and the Reconfiguration of Newsroom Practices”], published later as a book. As a journalist, Helder Bastos worked in the Jornal de Notícias, Rádio Press e Diário de Notícias, and he is one of the creators of the Observatório do Ciberjornalismo [Observatory of Cyberjournalism], and one of the organisers of the I International Congress on Cyberjournalism, to be held at Porto (Portugal) on December 11 and 12, 2008.

This entry was posted on Monday, October 20th, 2008 at 1:54 pm and is filed under cyberjournalism, Events, online journalism, Research. You can follow any responses to this entry through the RSS 2.0 feed. You can leave a response, or trackback from your own site.